Think about the moment right before you share something online. What’s going through your mind? Why do you want to share the story with your social network?

If you recall these moments, it’s likely that you will see a trend. Right before you hit the share button, you felt something. You saw something that made you laugh, gasp, cringe, or cry. The content hit you in the gut or the heart so strongly that you immediately wanted to pass it along to others.

The way content makes us feel is often what prompts us to hit the share button. And that’s why it’s such an important element of viral content.

Creating an Emotional Experience Is Crucial for Viral Success

After looking at 345 Fractl campaigns for our report on “What 300+ Content Marketing Campaigns Can Teach You About Earning Links,” we found this to be true.

We learned two things about our most successful campaigns (those that garnered the most links and social shares).

Emotional impact was the greatest differentiator between our most successful campaigns and all others.

Emotions are at the core of viral content. But that isn’t to say you can just look at Robert Plutchik’s Wheel of Emotions and simply infuse a feeling into your content strategy and watch it go viral. 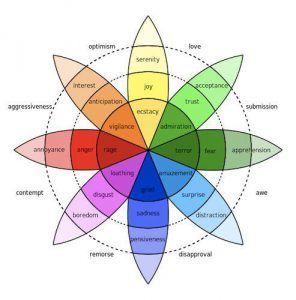 The truth is, you need to know which emotions to use. Fractl conducted two studies that show certain emotions and combinations of emotions are more effective at connecting with audiences and inciting sharing.

To understand the best emotional drivers to use in content, we conducted the “Emotions that Make Marketing Campaigns Go Viral” study.

We looked at 50 of the top 100 images over a three-month period from Imgur.com, as voted on by people on Reddit.com. We then surveyed over 800 men and women between the ages of 18 and 54 to find out which emotions each image activated for them.

We categorized responses, using Robert Plutchik’s Wheel of Emotion; images were classified as either positive, negative, or surprised (which could equal either positive or negative subjective reactions).

Then, we correlated these responses to initial views and share rates and found elements that were common in viral images for every demographic as well as differences that could change your marketing approach.

It may seem like we live in a jaded world that often focuses on the negative. But we found that positive emotional experiences catch more attention than negative ones.

Across all ages and genders, study participants reported that the most popular images from our study inspired positive feelings. The top 10 positive emotions responses were the following:

We found an especially high correlation between feelings of joy, amusement, and happiness and the number of initial views. People were drawn to these sentiments. They were more likely to pay attention to positive content, which is the first step in getting someone to share a story.

You first need to get viewers to see the content before they will share it, which is why creating a positive emotional experience is crucial for reaching a large number of people. It succeeds in initially attracting viewers to the material, priming it for social sharing.

This explains the recent success of the viral video of “Chewbacca Mom.” The most shared Facebook Live video of all time caught people’s attention. Audiences clicked to watch, laughed, and immediately shared to pass on the good feeling they got while watching the mom hysterically laugh while wearing a Chewbacca mask alone in her parked car. 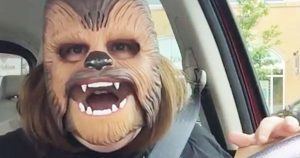 Fractl has also found success by infusing our campaigns with positive emotions.

Our “America’s Favorite Dog” infographic sparked joy, happiness, and delight by sharing graphics of the most popular dog breed in geographic areas across the country. The content created an emotional connection with people loyal to their breeds, which caught viewers’ attention and helped the campaign receive over 21,000 social shares; it was also featured on high-authority publications such as Mashable and Mental Floss.

Contrasting emotions seemed to be helpful in increasing impact and response. In the cases where negative emotions were present, they seemed to directly contrast positive emotions and enhance the passion toward the content.

Rather than only inspiring feelings of happiness or trust, some viral images inspired a range of complex feelings, suggesting that people are more willing to share content that offers more than a one-dimensional experience.

Our “Perceptions of Perfection” campaign proved this to be true.

The campaign featured an image of a woman who was Photoshopped by designers in 18 countries around the world. The graphics showed the intricate idealism of beauty standards, exposed the excessive use of Photoshop in the media, and highlighted the problem of unrealistic beauty expectations.

Viewers who saw the campaign were taken through a series of emotions. From interest and amusement to shock and surprise to anger and sadness. The project took audiences on a compelling ride that connected them to the material and prompted them to share the story. 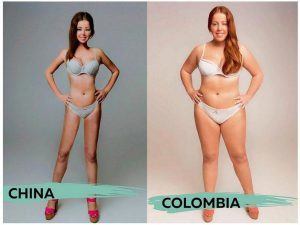 The campaign succeeded in spreading across the web; it garnered nearly 900,000 social shares.

Its powerful and emotional message also caught the attention of major publishers and online influencers. The campaign was featured on 600 websites (including BuzzFeed, The New York Times, and The Huffington Post). It was even shared by actress Sofía Vergara (who posted the content for her 7.7 million Facebook followers to see).

An Element of Surprise Grabs and Keeps the Audience’s Attention

Our study identified one emotional appeal that appeared most frequently in viral images: surprise.

Audiences were likely to share content that presented something unexpected, counterintuitive, or completely novel. Other emotional attractions varied, but surprise was constantly alluring. And it appeared in most of the viral content from our study – proving that surprise is a crucial ingredient in viral content.

Adding a unique angle, showing something in a new way, or presenting an interesting topic increased the likelihood of a piece of content going viral.

Fractl has used this “surprise” approach to create successful campaigns for our clients.

With our “Instagram, Drugs, and Rock ‘n’ Roll,” campaign, we shocked audiences by showing them the role that drugs play at concert festivals. Our data exposed the number of times that drugs were mentioned in Instagram posts that were shared from festival attendees. The campaign not only shared interesting information about the trends at concerts but it also exposed scary and shocking stats about the major role drugs play at popular concerts. 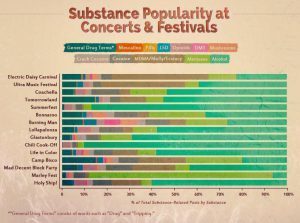 The information proved to be fascinating to audiences who shared it more than 90,000 times. Publishers were also drawn to the campaign which received 1,860 pickups.

Our “Your Face as an Alcoholic” campaign also caught attention by astonishing people with details on substance abuse. We created an interactive tool that allowed users to upload their photo and see what their face would look like after years of heavy drinking. Seeing oneself transformed evoked both fear and surprise in audiences and helped the content spread across the internet.

The campaign was featured in 916 stories and was shared more than 14,000 times.

In a new study, we dug even deeper into the connection between emotions and viral content. We conducted research to understand why certain emotions are so effective at driving shares.

In our “Why Certain Emotional Combinations Make People Share” study, we surveyed 400 people and asked them to record their emotional responses to 100 of the top images from Reddit’s r/pics community.

We also looked at a study that found it’s not just individual emotions that drive people to engage with and share content. Content goes viral when the emotions it evokes fall within certain configurations on the Valence-Arousal-Dominance model, an emotional categorization scale used in psychology

According to the Valence-Arousal-Dominance model, individual emotions are made up of a combination of these three factors:

The study found a correlation between elements on the Valence-Arousal-Dominance model and viral content.

Emotions that make people feel in control, such as admiration or inspiration, were present in the news stories that had a high number of social shares.

Emotions are a powerful tool in creating viral content and how you weave together the nuances of those emotions creates different audience actions and reactions.

So What Have We Learned?

After looking at this research and the characteristics of our most successful campaigns, we have learned a few things.

To increase the odds of a piece of content going viral:

Emotions are almost as complex in content in viral content as they are in humans. But by learning the lessons from these studies, you will be able to create content that infuses emotion in the right place to increase your content’s chances of going viral.

Fractl is a leading content marketing agency that utilizes expert knowledge and time-tested, repeatable processes to create stories with emotional drivers that result in highly shareable content for your brand, contact us today to learn more.

See how we can impact your bottom line